“The Maze Runner” by John Paesano

I haven’t heard John Paesano’s recently released score to The Maze Runner yet, but the composer stated officially, that among the music that has influenced his work on it, were John Williams‘ celebrated score for Jurassic Park, Jerry Goldsmith’s haunting compositions for Alien, and Hans Zimmer’s emotive score to The Thin Red Line. Quite an eclectic choice of references. But I’m not here to judge over the music today. I’m here for the design… obviously. It’s the teaser poster by creative agency Cold Open, that caught my eye in the first place. And a few days ago I thought to myself, why not? Let’s add this one to my other pile of fifty-six cover series currently in the making. Why not!? 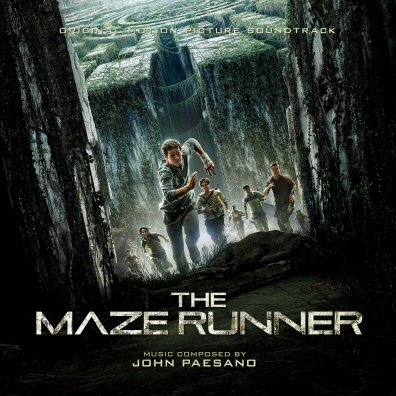 The Maze Runner was blessed with a really great advertising campaign and also the original soundtrack cover was pretty cool (#1). Not much to improve here, let alone the need for an alternate artwork. Nevertheless I sat myself down and started to work out a few sketches. They’re more or less just variations of the original (#2, #3). One was based on a really great fan-art by deviantArt user “Vaporage” (#4). And for another one I once again used my Signature Edition template (#5), yet unfortunately this time with a fake signature.

But the core of this entry and the real reason why I started working on this series in the first place, were the first two designs (#7, #8) of the following set.

I really wanted to have those images featured on my blog as they look just gorgeous! While the first one (#6) grabs your attention with its daring colour palette, the second one (#7) features a really imaginative and almost dreamlike image of the maze. I love the surrealistic approach of it. No matter how good the movie or the score are, they could never rival the fantastical thoughts this image evokes in my head.

However, working on them wasn’t as easy as one might think. Technically speaking I had some troubles placing the album credits on the first one. You’re kind of limited to the vertical design, everything else would spoil the overall image. And there’s not much space to use properly, so I had to rearrange the labyrinth walls a bit. The second cover on the other hand was a piece of cake. You can’t do much wrong using the font “Helvetica” anyway. It just goes together with almost any image, and it always looks professional.

The last two custom covers (#8, #9) are more of an experiment. I wasn’t even sure whether I should publish them here or in my next rarities collection. Beside the small logo on the sticker they contain absolutely no official material at all. The backgrounds consist of a generic vinyl texture combined with a “retro grunge” maze pattern like this. The idea was to make the film title as low profile as possible. Much like a real maze you can only discern it from a distance. Up close all you see are walls (fucking many of them!). It’s a well-known optical illusion that’s been used by many artists before me. But I have added a sticker for the visually impaired too. And also, to boost the sales figures.