There are two kinds of people: Those who leave a movie theater as soon as the credits start rolling and those who hold out until the very end, when the lights finally come back on.

If you are part of the second group like me, you probably know of all the rewards you get if only you keep your ass seated as long as possible. Starting from the usual mid- and post-credits scene to animated end credits rolls and occasional outtakes.

The most rewarding thing however might be those brief moments of tranquility, when you can just lean back and simply enjoy the ravishing beauty that is film music.

In 2008 a movie came along that really pushed the staying power of its audience to the limit: Matt Reeves’ Cloverfield.

After a long and straining shakycam-fest of a film, the no-frills closing credits start in muted silence. It’s only after ninety seconds that Michael Giacchino’s Cloverfield overture “ROAR!” starts to sneak in very slowly. But what a track it is! Giacchino put in everything he had and more into this one single composition. Let me quote Jonathan Broxton from Movie Music UK for a moment:

Giacchino’s piece is performed with great gusto by a full orchestra and choir; it’s a fun, portentous march with a flurry of thrusting cellos, fluttering flutes, resounding brass blasts, ‘aahing’ female voices, and a lyrical, vaguely-oriental sounding string bridge – a blatant homage to the late Akira Ifukube, whose music accompanied all those wonderfully cheesy Japanese Godzilla films, dating back to the 1950s. It’s a superbly nostalgic throwback to the age of studio creature features, and has all the uncompromising seriousness those 1950s scores had, despite the inherent campness and ludicrousness of the film’s subject matter. Definitely recommended.

I’ve always wanted to remake the official iTunes cover artwork (#1) to change some of its text placement and extend the field of view of this gorgeous source image as much as possible. And of course to update the image size along the way (#2).

Due to the lack of alternative source material, additional custom covers were a bit of a challenge. The only proper image I found was an advertisement flyer for the DVD release, featuring an atmospheric shot of a city in ruins. Turning it into a reproduction of the famous Escape From New York album (#3) by John Carpenter was an obvious thing, especially since Cloverfield is basically nothing more than an actual escape from New York (#4). Here’s an alternate version with corrected colours. 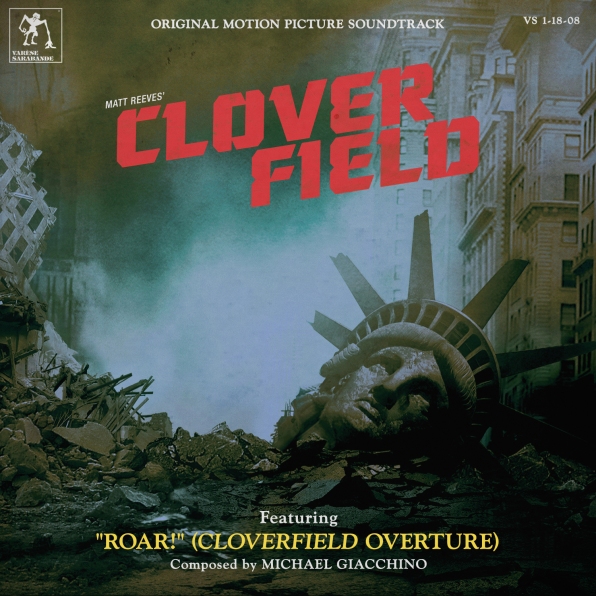 My only idea for an original custom cover was inspired by the title card. So I took a few screen caps and turned them into the minimalistic artwork below.