“The Martian” by Harry Gregson-Williams

After last week‘s side blow about custom movie logos and how they are bound to fail in almost every case, it was crystal clear that I would put myself in a spot with this week’s The Martian. This custom cover series more or less served as a playground for my graphic design abilities… or rather inabilities, if you ask me. I’ve not only restrained myself from using the official logo as much as possible, but rather encouraged to go down a totally different route, graphically and also stylistically. But first things first. 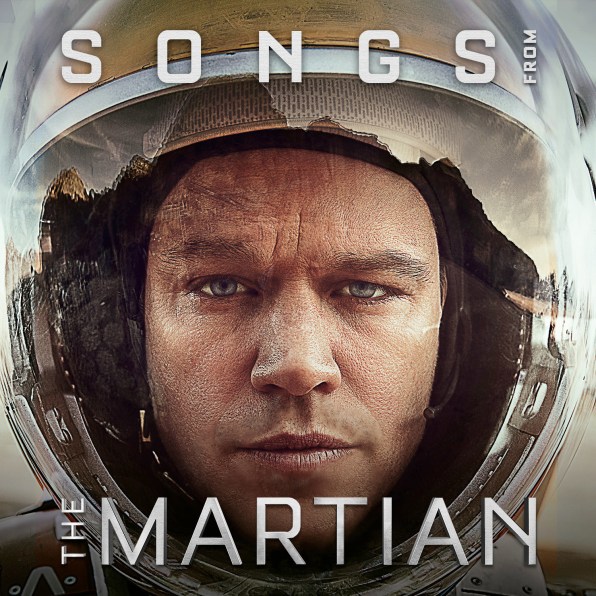 With The Martian Hollywood finally got it right. After numerous failed attempts to produce a successful Mars-themed film, Ridley Scott finally managed to break that curse. The Martian is a return to form for him and left me full of confidence for his upcoming Prometheus sequel.

The soundtrack is fantastic as well and deservedly got releases for both Harry Gregson-Williams’ score (#1) and also the licensed songs compilation (#2). And while I must acclaim Columbia Records for putting out two separate albums, I immediately have to withdraw all praise due to their sloppy and inconsistent placement of the film logo. Perhaps this is too much to ask for from a big player. But it wouldn’t have taken the designer thirty seconds to make sure everything is aligned neatly. Or maybe it was done on purpose, but then I just don’t get it. At least they acknowledged the cover of the Andy Weir novel and went with a similar font choice (“Bourgeois Med” instead of “USN Stencil“).

Something I totally scrapped for my first bunch of customs. 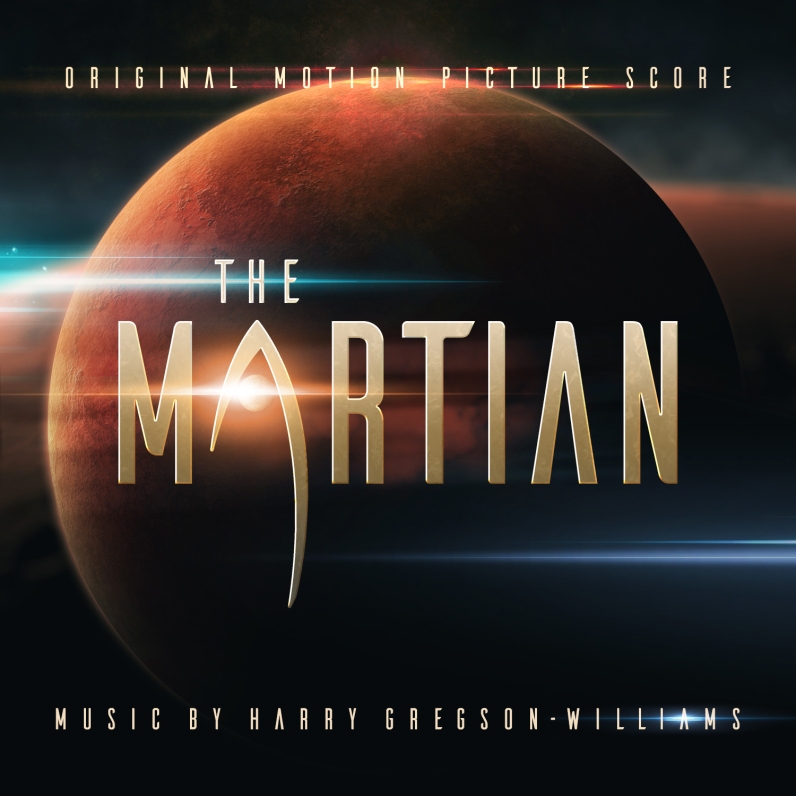 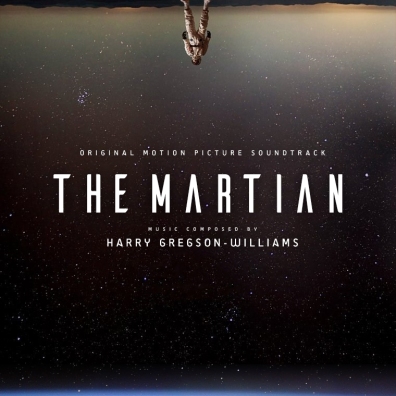 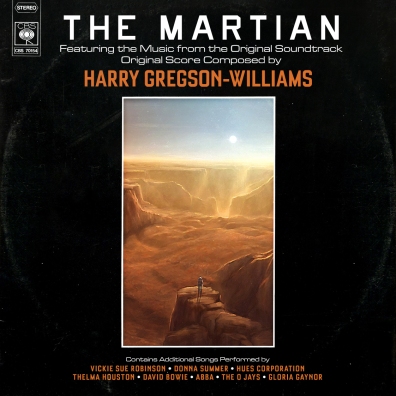 I want you to bear in mind that making custom movie logos without appropriate background images doesn’t make a whole lot of sense. Luckily for me Ignition Creative came up with a couple of alternate posters (#4, #5, #7) for the film, which I more than happily snagged from them. The rest was randomly stolen from the Internet (no shit sherlock).

My first try (#3) consists of a really beautiful wallpaper of the NASA Curiosity mission which I ran into while looking for official source material. The custom logo is a direct rip-off of NASA’s Journey to Mars project. But I applied the action-adventure touch in form of a golden metal texture and the remaining stock of lens flares which was still left from Jupiter Ascending. And once more my affinity for circular shapes on square album covers is emerging again. It’s quite interesting to see The Martian in completely different light.

The next one (#4) would or rather should be my reference to Moon, another Sci-Fi classic and also the very first custom cover series I published on this blog. I went to find the most bulky and bold font as possible (“Clutchee“) to create enough room for the overlying text (“SciFly“). This was my first custom cover within this series and I conceived this design as soon as I spotted Ingition’s poster art. It isn’t perfect to be honest, but it is different and sometimes that alone is enough.

Cover #6 is my traditional retro artwork, because no entry is complete without one. It’s based on an absolutely gorgeous painting of Valles Marineris created by Portuguese artist Tiago da Silva. His awe inspiring image perfectly captures the solitude Mark Watney must have experienced on such an alien yet all-soothing location. All I did was to remove one of the originally two astronauts and then wrap it up in a new virtual Vinyl jacket. 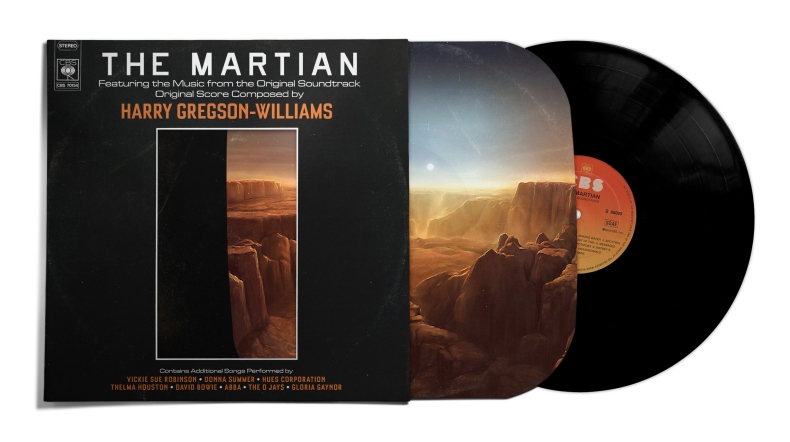 You know, making these custom covers is a really relaxing leisure activity. I’m sitting at my desk in perfect satisfaction, listen to the soundtrack on repeat and surf around the web while Photoshop is waiting in idle mode, hidden behind numerous browser windows. I can be creative without limits and never know where I’m gonna end up. And I always get giddy with excitement once a custom cover series is nearing completion (and publication).

However, sometimes it can also be a drag. On days when nothing works like I want it to and the simplest tasks seem to fail inexplicably. That’s when I normally download a bunch of official wallpapers and logos and start to reproduce the official material as faithful as possible. The covers below (#9 to #12) do not represent the ultimate wisdom in Photoshop, but they thoroughly serve a purpose.

For example, all it took me to come up with #9 was to find an exact match of the official font (“Bourgeois Ultra/Med”), position the official logo as carefully as possible and then try to find a new arrangement for the remaining text. Nothing fancy, true to the original artwork, yet consistent in itself. Okay, I had to create the background out of two different images, but that’s a standard excercise by now. And once I have created my main template, all of the subsequent artworks are easy-peasy. 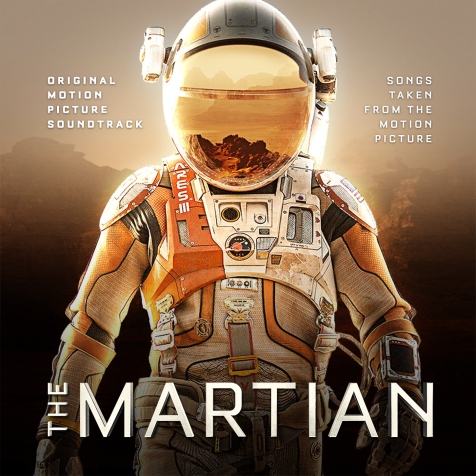 My final three covers (#13 to #15) arose from the simple reason that I found those huge textless posters with Matt Damon’s mug on them, and I didn’t want to leave them unused. The asymmetrical image composition was a desperate attempt to save what can be saved from such boring source images (srsly… a giant face?). However I’m not sure if graphic design offers enough possibilities to fix such slowpokes. I tried to adopt a uniform layout by tilting all text elements and making a kind of collection box (#13) which holds the two individual soundtrack discs (#14, #15).